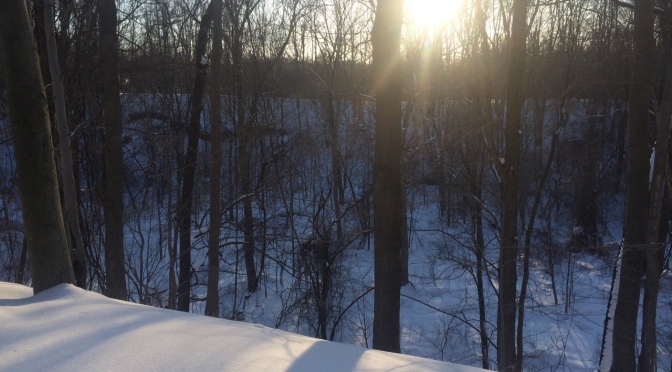 So, the sun finally came out it was 9F (about -12C) but no wind. So I took a hike. I have been cooped up too long. The snow is at about 2 feet with drifts up to 4. It was closer to 20” in the woods. So hiking is a hard core workout and too difficult to be fun, but when it is this cold there is a trick. Animal paths build up ice. So once you find a good one you can more or less walk on snow without snow shoes. Set off and you are back up to your knees. Even a single animal path builds up a little ice and can make it easier going, and ruts work ok, but the good paths stick out because the snow blows off the top and drifts a little on the sides. The one I took was about a mile before it came to a gorge. Best part of following a trail is that if your hiking in the snow seeing the animal paths and tunnels is usually the most interesting thing. So tracking makes it both easier and more interesting. BTW do not go on a hike when it is this cold unless you are used to it and dressed for it (I wear neoprene chest waders). Tracking in winter is neat but not worth freezing to death over.

Well finally have day above freezing? Time to enjoy the quaint Erie custom of roof shoveling. Then shovel out a run for the chickens. Now where did I leave that roof shovel. Ah mother F….